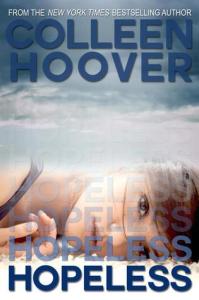 Synopsis:Sometimes discovering the truth can leave you more hopeless than believing the lies…

That’s what seventeen-year-old Sky realizes after she meets Dean Holder. A guy with a reputation that rivals her own and an uncanny ability to invoke feelings in her she’s never had before. He terrifies her and captivates her all in the span of just one encounter, and something about the way he makes her feel sparks buried memories from a past that she wishes could just stay buried.

Sky struggles to keep him at a distance knowing he’s nothing but trouble, but Holder insists on learning everything about her. After finally caving to his unwavering pursuit, Sky soon finds that Holder isn’t at all who he’s been claiming to be. When the secrets he’s been keeping are finally revealed, every single facet of Sky’s life will change forever.(Goodreads)

I originally read this because I was trying to get out of a reading slump. Colleen Hoover has always been one of those authors that has always pulled me out of reading slumps. Her writing is addicting and her storyline make a reader invested in the story.

However, I didn’t find this to be the case with Hopeless. At times it was enjoyable, because it had a lot of different themes in it. I liked that there was a mystery plot that developed along with a romance contemporary that Colleen Hoover is known for.

I really liked the relationship development that occurred between Sky and Holder. I thought that their romance wasn’t as instalove as romances can tend to be. I enjoyed that they shared a strong friendship. I also like that at a one point in the story, there was a scene were the main characters were about to have sex and the female protagonist said she wasn’t ready, I felt like the male character did not pressure her to continue and supported her throughout her trying to piece together her past.

Holder wasn’t one of those book crushes that I usually get all the feels for from reading Colleen Hoover books. However, I did like how intense he was portrayed and his whole bad boy persona really made the book more interesting as he was a very big part of the novel. Sky, at parts was a really interesting character to watch because you can see her go through so many emotions. As a reader you can see her fall in love, and figuring out her place in Holder’s secret. Looking back on my reading, and thinking about Holder’s character. I feel like he was written to be to simple, as he is a character that was dealing with holding on too a lot of information and it didn’t seem like he was a very grieving character.

I didn’t like that the resolution of this story was so anticlimactic. The entire book build up the storyline and I felt like it resolved just too easily.  The story also had a lot of triggers, such a rape and suicide. I think that one of the main things that really made me give this book  2 stars is that it wasn’t very memorable. After I finished reading it I only really remembered some main points but not anything that made the story super enjoyable to sit through and read. Also, this isn’t a book I plain on rereading anytime soon.

Overall, this story just fell flat for me. I just didn’t find it to be memorable at all.  The entire book was just okay for me. I hope to enjoy “Losing Hope”, a little bit more.

Until Next Time With Warms Cups of Tea and Just a Few More Chapters,