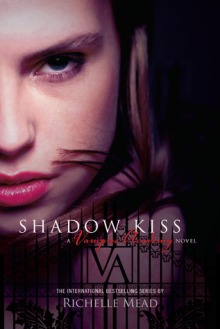 Synopsis: WHAT IF FOLLOWING HER HEART MEANS ROSE COULD LOSE HER BEST FRIEND FOREVER?

Lissa Dragomir is a Moroi princess: a mortal vampire with a rare gift for harnessing the earth’s magic. She must be protected at all times from Strigoi; the fiercest vampires – the ones who never die. The powerful blend of human and vampire blood that flows through Rose Hathaway, Lissa’s best friend, makes her a Dhampir. Rose is dedicated to a dangerous life of protecting Lissa from the Strigoi, who are hell-bent on making Lissa one of them.

Rose knows it is forbidden to love another guardian. Her best friend, Lissa – the last Dragomir princess – must always come first. Unfortunately, when it comes to gorgeous Dimitri Belikov, some rules are meant to be broken…

Then a strange darkness begins to grow in Rose’s mind, and ghostly shadows warn of a terrible evil drawing nearer to the Academy’s iron gates. The immortal undead are closing in, and they want vengeance for the lives Rose has stolen. In a heart-stopping battle to rival her worst nightmares, Rose will have to choose between life, love, and the two people who matter most… but will her choice mean that only one can survive? (Goodreads)

I have read so many books in this series lately that I have just gotten myself immersed in the story. The anticipation of the storyline gets more and more intense with each book. There is just so much going on.

Throughout Shadowkiss, the main character Rose struggles with being a good guardian. In an assignment that is assigned to all the Dhampirs in their third year which is to protect a Moroi while the staff stage sneak attacks on them as if they were out in the real world battling Strigoi. However, Rose finds herself not only dealing with the staged attacks but also with spirits (ghosts) that begin to haunt her. As Rose figures out what is happening to her and why these spirits are contacting her, the Strigoi become an active threat to the academy. Mix in a forbidden love and you have one enticing tale.

I loved this book, I love this series. I have not read a series back to back in such a long time. I have been borrowing this series from the library.( YAY support your local libraries!!!) I used to own this series but the books sat on my shelf for so long that I ended up giving them away last year when I moved out because I was trying to be a minimalist but honestly who did I think I was kidding…

I found this book to be addicting. I could not stop reading it. I was rooting for Rose and Dimitri’s relationship. Their relationship is forbidden and the character fight with their inner self in order to stay away from one another. But, their draw to one another is just too intense and they can’t help but want to be together. I was fangirling hard. There is also, another character introduced that happens to create a love triangle in this particular book and that is Adrian, a royal morori that the vampire queen has special plans for.

The series just gets better and better as the books go on. This book is full action, twists and turns, and a romance which makes this series so difficult to put down. I think that the fact that the series keeps getting better and better with each book speaks for itself. You must check this series out, one of the best Vampire young adult series there is out there.

Have you read the Vampire Academy? Did you find them addicting?

Any fast paced books that you think I would enjoy? Leave a comment down below.

With Warm Cups of Tea and just a Few More Chapters,