Yesterday, I got to spend a few hours with my mom. And let me tell you I felt like a 5 year old again but, the time spent with her was priceless. We ended up going to watch La La Land, which is brand new musical playing in theaters. Initially, when I chose the movie I knew very little about it, only that it had Emma Stone was in it and I like her as an actress. 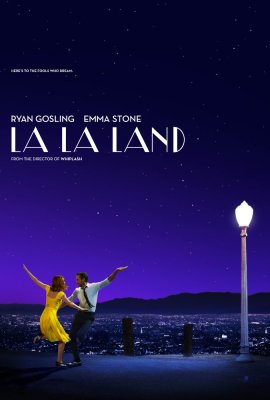 Synopsis:
Mia, an aspiring actress, serves lattes to movie stars in between auditions and Sebastian, a jazz musician, scrapes by playing cocktail party gigs in dingy bars, but as success mounts they are faced with decisions that begin to fray the fragile fabric of their love affair, and the dreams they worked so hard to maintain in each other threaten to rip them apart.(IMBD)

I wanted to see this movie the moment that I saw a trailer of this movie on youtube. I really enjoyed this film. It had a very independent film vibe to it and it was designed as a video collage. I was surprised that this movie was a musical because I wasn’t expecting it at all. Looking back, it does remind me a little of “Across the Universe.”  I thought that  the movie was very well designed to showcase both of the lives of jazz musician Sebastian and an actress named Mia.

I really enjoyed the story between Mia and Sebestian. I thought that the relationships were complicated yet well developed. The characters were put into difficult situation as they tried to find their own dreams while trying to be supporting of each other. This movie portrayed how one supports someone that they really care about however, it also portrays the hardships of having dreams and putting another’s dream before your own.

I loved how Hollywood was portrayed and that a lot of the movie was done in a coffee shop on a filming set. It was very easy to put yourself in the shoes of the main character, if you have visited “Universal Studios”. I was really able to get a feel of actually being in the coffee shop that Mia worked at  and being surrounded by the celebrities and the set life.

Although, I was really satisfied with the movie as a whole. I was disappointed with the ending, as I had my own hopes for how it would have ended. I definitely recommend this movie to anyone who likes a good love story that revolves around dreams.

The most important thing I got out of this movie, was that dreams are just as important as love and that to love is to dream. But, it also got me thinking that maybe you can have it all an epic love and reaching all of your dreams.