Sparks are igniting.
Flames are spreading.
And the Capitol wants revenge.

Against all odds, Katniss has won the Hunger Games. She and fellow District 12 tribute Peeta Mellark are miraculously still alive. Katniss should be relieved, happy even. After all, she has returned to her family and her longtime friend, Gale. Yet nothing is the way Katniss wishes it to be. Gale holds her at an icy distance. Peeta has turned his back on her completely. And there are whispers of a rebellion against the Capitol – a rebellion that Ka 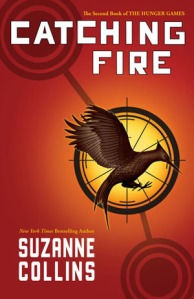 tniss and Peeta may have helped create.

Much to her shock, Katniss has fueled an unrest she’s afraid she cannot stop. And what scares her even more is that she’s not entirely convinced she should try. As time draws near for Katniss and Peeta to visit the districts on the Capitol’s cruel Victory Tour, the stakes are higher than ever. If they can’t prove, without a shadow of a doubt, that they are lost in their love for each other, the consequences will be horrifying.

In Catching Fire, the second novel in the Hunger Games trilogy, Suzanne Collins continues the story of Katniss Everdeen, testing her more than ever before…and surprising readers at every turn.

When I first read the first book in this series called “The Hunger Games”. I didn’t own the rest of the series so I didn’t continue on right away. Let’s say a couple of years later I finally picked up the second and third book in the series. “Catching Fire,” as most people know is the second book in the series. It continues on where the first book ended. As Katniss, is enjoying her life in the Victory village, she gets a surprise from the government, by having to participate in the “Quarter Quell.” This is another hunger games competition accept is involves the two victors from each district of the all the prior Hunger Games.  As you may have guessed Katniss and Peeta go back for a second round.

I gave this book a 4/5 stars. This book gave me so much feels. I absolutely loved the friendship that was growing between Peeta and Katniss. I also enjoyed the complexity of Katniss’s situation as you saw the way Katniss was torn with her relationship with Gale and Peeta. I really like Peeta more in this book, mainly because he was very protective of Katniss and that was a nice side to see of him. Also, I really enjoyed how Katniss and Peeta worked a lot like a team to get through the struggles that they faced in this book. Once again Katniss was a really strong character, but in this book you also see a lot of growth within Peeta’s character as well. He was constantly thinking of Katniss and he was trying to do anything in his power to keep them both safe. This was a nice change from constantly seeing Katniss protecting them in the games.

If you are wondering if you should pick up this book after you read “Hunger Games”. The answer is absolutely yes. The story and writing was just as amazing as the first book. This book didn’t have the sequel burn out as many sequels have. Another thing that I liked was that it was a really fast read and you get sucked into the story to the point that you feel that you are actually in the story yourself. This book still had all the thrills, the twists and turns that the first book had, with a lot more chemistry between the characters. I didn’t want the book to end and I felt that it ended on a complete cliff-hanger. I can not wait to pick up the next book to find out the conclusion to this amazing series.